How IoT is driving smarter and more sustainable agriculture? 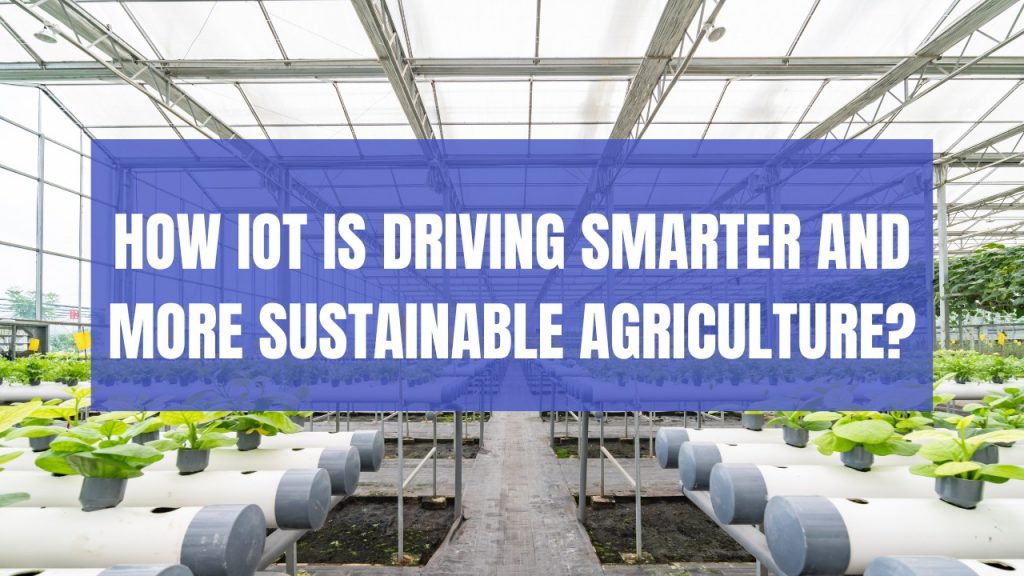 IoT-based applications are becoming increasingly common within the agriculture industry. Agritech is booming thanks to the introduction of advanced IoT tools, systems and solutions for large-scale farming which have a wealth of purposes benefiting farmers and consumers.

In the UK, agriculture is highly efficient and it produces 64% of the total amount of food consumed by the country. However, with the world’s population rapidly increasing and demands on the planet rapidly growing, farmers all over are seeking ways to increase the rate of production, protect crops, implement more efficient water usage and more.

Below, explores the different ways connected applications are helping to drive more sustainable and smarter farming practices around the world.

Recently farmers have replaced traditional satellite images with drones equipped with GPS trackers and systems to monitor farms, these advanced tools now allow farmers to access real-time data for their land. Meaning they can quickly establish the conditions of crops and check soil moisture.

IoT is also used for irrigation purposes, for example, intelligent irrigation systems with dedicated sensors can be applied to automated sprinkling for farmers’ fields and/or ventilation control in greenhouses, helping to check humidity levels. And when placed within the crops themselves, directly on plantations, sensors can monitor growth rate and hydration.

Tractor GPS tracking has also advanced and is a must in the industry, not only do the devices monitoring the tractors help farmers keep a record of the locations they’ve been looking after but they safeguard the assets and mitigate the risk of theft.

Onboard systems also monitor crop yield and can target where to deploy more fertiliser where eyelids may be lower than other parts of the field.

The rise in the world population has largely impacted the arable land available. Estimates show that food production needs to increase by 70% over the next 30 years to accommodate population growth. The outcome of this is that farmers are seeking alternate measures to accommodate this growth, such as vertical farming.

IoT sensors and vertical farming make great partners because of the variety of sensors that can be implemented, they are easy to set up, can fit in challenging areas and allow for multiple functions in just one sensor, such as monitoring temperature, light, humidity and more across—helping farmers to optimise their operations both strategically and financially.

Another benefit is that they also function across large ranges – making them the perfect assets for rural locations.

Did you know that IoT is even being used to help pull out good tomatoes from the bad? Simply by establishing the colour of the tomato. Autonomous or semi-autonomous machines empowered by IoT can assist farmers from fruit picking such as tomatoes to planting seeds and harvesting. What is even cooler is that robots are even being used to automatically de-weed farms, protecting the crops and soil.

When it comes to farming livestock, IoT technology such as recognition systems and biosensors are now put in place to monitor cows and sheep for example. Cameras around enclosures or sensors can be placed under the skin of animals to monitor their behaviours to help identify when an animal may need special treatment and to improve the welfare of the animals.

GPS tracking collars for livestock are also being used so farmers know where they are at all times.  They can monitor their health and allow farmers to run the farm with reduced labour or increase efficiency, helping to cut costs and minimise resources.

Here we’ve named only a few of the technologies available in today’s agricultural industry that are becoming a growing necessity for everyday farmers. With so many challenges like climate change, over-cultivation and pollution impacting farmers, it is important to be able to optimise operations and improve sustainability.

By rapidly processing the data produced by IoT sensors, tracking and more, farmers can make impactful decisions for all their operations now and in the future.