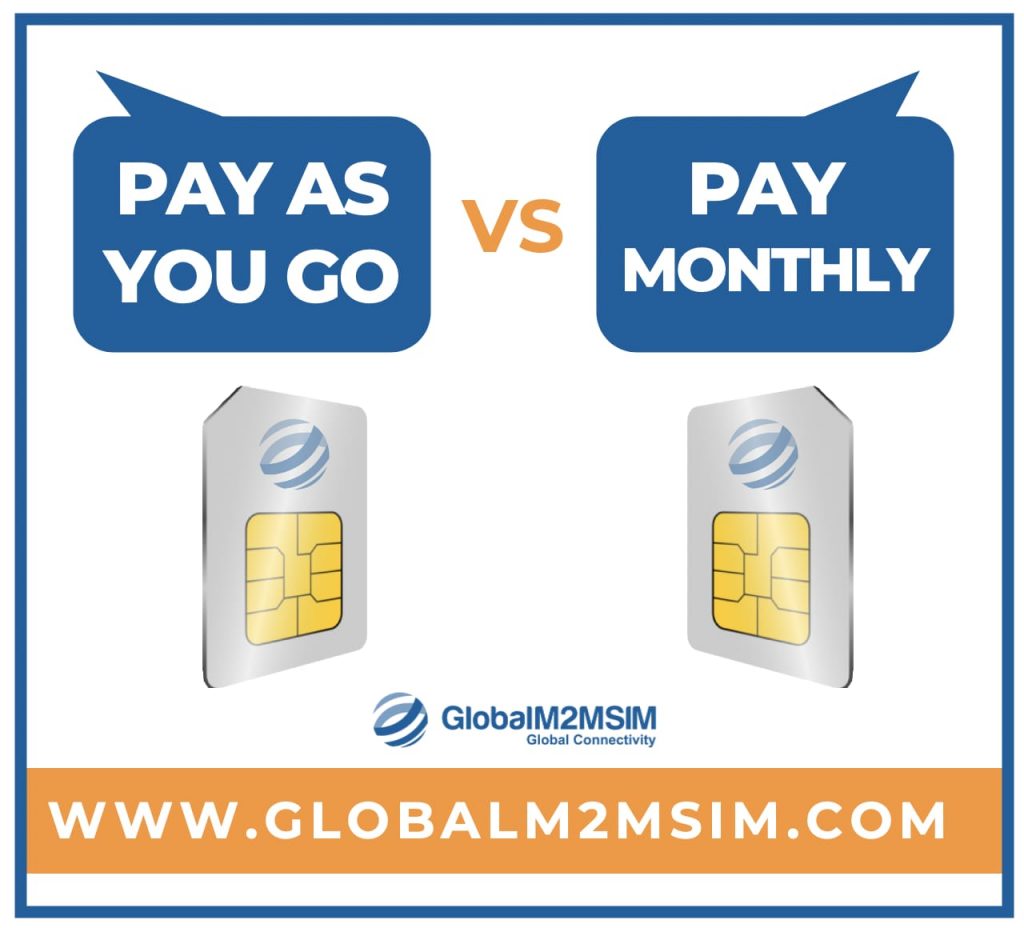 We often get asked by customers which type of SIM to choose between our Pay As You Go data SIM and our monthly payment data SIM.

PAYG vs Monthly – Which wins?

The answer is…. “Well it depends…”

Fundamentally the choice is to pay monthly for a fixed amount of data OR pay as you go so that you only pay for the data when you use the SIM.

Often Pay As You Go is selected due to the perception that because there is no contract you will save money when the SIM is not being used.  Additionally, please customers don’t want to be tied into a long term contract.

Both considerations can be “red Herrings” and end up costing you more money very quickly.

Choosing which type of plan to select is not always that simple, especially when there is a cancel any time policy on a pay monthly SIM and Pay As You Go data charges are higher than pay monthly data charges.

So, to help you decide what’s best for you, here are the top five things to consider are:

This is fundamental and by far one of the most overriding considerations.  Unless you have some idea of how much data your device uses per month then it is “impossible” to figure out the best option in terms of Pay As You Go or Pay Monthly.

M2M, IoT devices, trackers, alarms and many other similar types of device do not typically use a lot of data. These devices do not use data like your mobile phone does!  The exception would be video streaming applications such as CCTV.

We often get asked “how much data will my device use”. Whilst we might have a rough idea, only you can figure how much data your device will use per month.  If you don’t know, contact the device supplier and ask them for an indication of what their devices typically use per month with your use case or scenario.

Make sure you give your supplier an idea of how you will use the device.  They will probably already know the approximate amount of data the device will use per month.

Data session may be billed in various increments such as 1kb, 10kb 50 kb etc.  This may depend on the local networks and the roaming agreements in a particular country.  In general in the EU and UK, the minimum billing increment is 1kb for initial increment and subsequent increments.  However, outside of the EU and UK there may be a higher initial minimum billing increment and usage increment.  For example a 50kb minimum followed by a 10kb increment would mean that you will be charged no less than for 50kb even if your device only used 15kb for example.  Another example might be that the initial billing increment (minimum charge) may be 20kb then followed by 1kb increments.  In this instance, if the device sent less than 20kb, the minimum charge for data use would still be for 20kb.

If you only plan to use your SIM a few times per year, or irregularly, then check the minimum use requirements enforced by your provider.  Some network will deactivate a SIM if it is not used regularly or lies dormant for a period of time.  Sometimes this may be as little as Three months.

If you fail to use your SIM and its deactivated and you lose any credit on the pre paid SIM, then the effect cost per mega byte of data goes up as you have lost all the credit on the SIM.  For example, if you had £10 of credit on the SIM and only used 1mb, then the cost to you has actually be £10 per MB.  It’s a case of use it or lose it.

Some device manufacturers configure their device s this way to open and close a session each time data needs to be sent and do not enable you to change the configuration.  This can be costly on a Pay As You Go SIM with a minimum charge per session.

A data session is when the device wants to send information to the remote server or application.

Some devices will be “asleep” and will requests and start a data session each time they want to send information or data.  Think of it like this… When you make a phone call, you pick up the phone, call, talk, then hang up.

Some devices open a data session and keep it open regardless of if they have information to send.  With the phone analogy above, you would dial the number you want to connect to and talk to throughout the day, it like leaving the line “open” so that you could talk at will and without having to pick up the phone.

Charges can vary depending on the way your device works or is configured, and the billing method used by the network.

This is pretty self explanatory.  If your device is in use a lot, then the chances are it will have a lot of data session, particularly if its opening and closing data sessions each times it sends.

For example, lets say a device opens and closes each times it sends data.  Lets say that it sends Thirty times per day, every day of the week.  That’s 30 x 30 = 900 sessions per month.

Alternatively, if the device opened one session per day, then it would only have 30 sessions per month.

Considering any minimum session charges, the 900 sessions per month could be significant when compared to the fixed amount of data per month option, which does not consider how many times a device opens and closes a data session.

This was mentioned in consideration Two (2) above.

If the SIM has a minimum data charge for each session then these coast can add up and exceed a monthly payment SIM if the SIM is in use regularly and for extended periods.  See below for a worked example.

We often get told by clients that they use a single network SIM for their device.

That’s fine, but think about the exposure you may be incurring by not having a SIM that has no back up network(s).  If the single network fails or has an outage for some reason, then the device cannot connect.  This may have dire consequences if the device is used in a critical application such as monitoring vulnerable people or high value asset.

A multi network roaming SIM, by its very nature has multiple networks it can use.  If one fails, then the device should tell the SIM to switch networks, thus maintaining a connection and keeping the critical data flowing.

Lets say you have a tracking device that uses about 20mb of data per month.  Use case is in a vehicle that is UK based but also visits mainland Europe.

Lets say that the device opens and closes a data each day and operates twenty days of each month.

The SIM in use has a minimum data session charge of £0.01

Most trackers will send data continually but let’s assume the device is set to record the vehicles location every 30 seconds and send them every 90 seconds.

In this case, the amount of data will be less than the minimum charge so every 90 seconds there will be a charge of £0.01

If the vehicle is in use 8 hours per day, then this will cost…

As the vehicle is in use 20 days per month, then the monthly cost would be

It’s a no brainer, especially as the pay monthly SIM has no contract and can be cancelled anytime. It also roams on multiple networks giving peace of mind, minimising the risk and consequences of not being able to connect.

This added redundancy of additional networks could be viewed as extra value.

The SIM roams on 4 networks, its like having 4 SIMs in one. There are no GPS trackers that allow you to insert four SIM cards, but if you could, you might pay, say £5 per SIM, that’s £20 per month for equivalent network coverage.  The £0.99 per month really does look like a bargain 😉